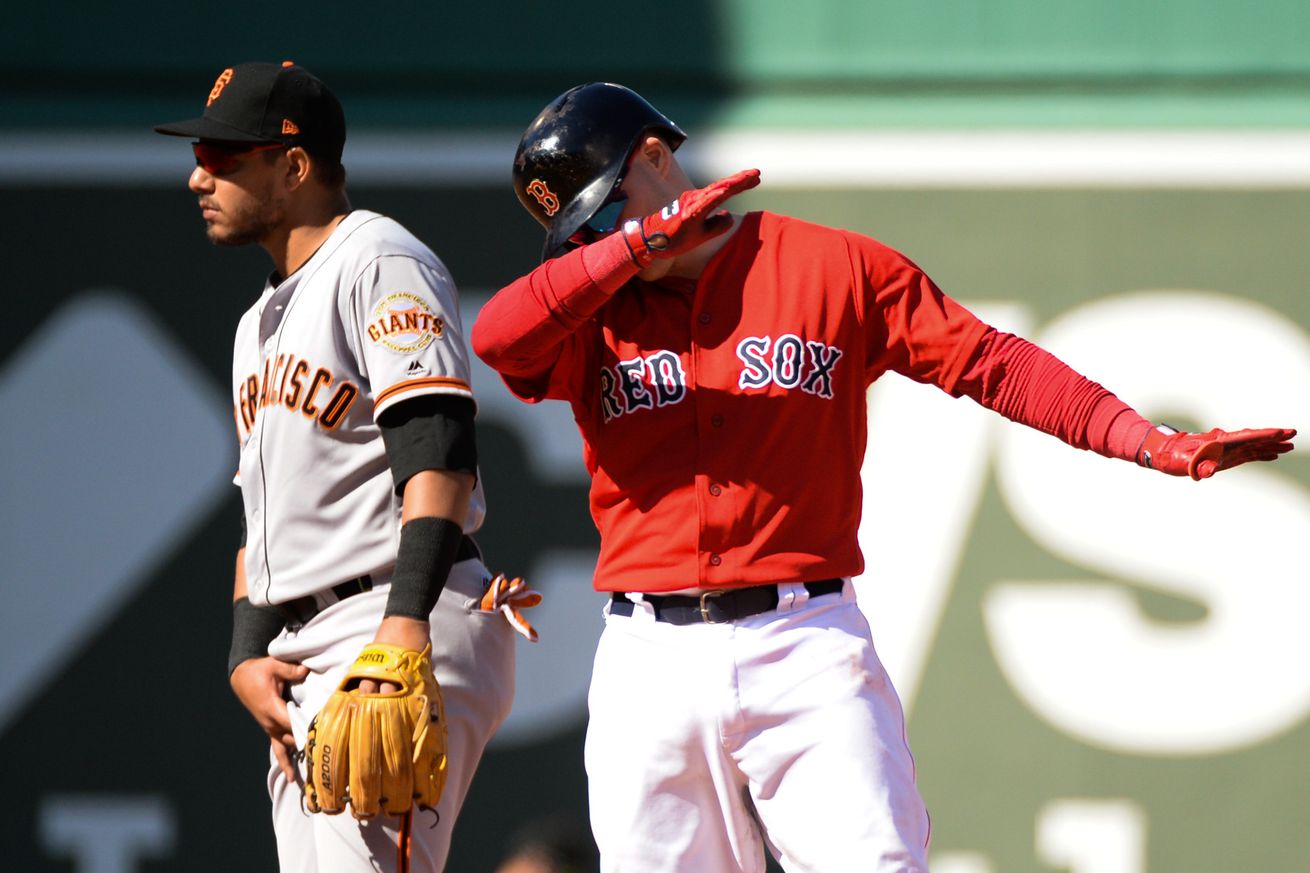 It was an aggravating game even when the Giants had opportunities to tie or take the lead late.

Today’s game smelled like the turgid corpse of the Giants, freshly rotting from their series win and death-farting their way through a bad loss at Fenway Park this afternoon. Oh, you don’t think winning a series produces corpses? Well, fine.

Today’s game sounded like a fastball slapping a catcher’s mitt as the Giants’ swung and missed. That’s not hyperbole. That was the soundtrack for today’s game, scored by the Boston pitching staff.

If you watched any part of this afternoon’s game, you learned nothing from it except that maybe Madison Bumgarner’s best bet for a long career is to stay in the National League and avoid AL teams whenever possible. And to never pitch on the road.

Bumgarner just hit 200 innings. He is going to have an ERA north of 5.00 on the road. He will have three road wins, all in the division (at San Diego, Colorado, Arizona). You'd have to think that could affect his market in free agency. Which, of course, can only help #SFGiants

Bumgarner could’ve been flawless today and it wouldn’t have mattered, though. Eduardo Rodriguez was dominant and the Giants’ getaway day lineup was especially Triple-A-ee.

On the other hand, winning 2 out of 3 in Boston is a nice way to end the season. They mounted a rally in the last two innings and had the bases loaded with no outs in the 9th inning. And then Brandon Crawford, Mike Yastrzemski, and Evan Longoria struck out in succession after decently long at bats and that was that.

He gave up two runs in the 1st after Evan Longoria hit a sac fly to give the Giants a 1-0 lead in the top half of the inning. It all fell apart for Bumgarner in the 2nd inning, though, as a combination of shaky defense and fluky-bad batting average on balls in play luck got to him. Or did it? The NBC Sports broadcast threw up this graphic:

The Red Sox did not hit the ball hard but they weren’t beating shifts, either, or taking advantage of a fleet of Denards Span or Hunters Pence. The Giants’ outfield defense isn’t elite, but if Pillar, Slater, and (today) Joey Rickard couldn’t make tough plays, it might’ve been for good reason. If you expand out that NBC Sports graphic, using the same Statcast data that they did, then it becomes a little more obvious what happened:

Just one of those hits probably shouldn’t have been a hit — Christian Vazquez’s — and Austin Slater had the ball in his glove for a second before it popped out. Otherwise, the Red Sox were simply hitting them where they weren’t and because Madison Bumgarner was still trying to figure out how to hit his spots, it was a perfect formula for failure.

Two bad innings of pitching was all the Red Sox needed and more than plenty to subdue the Giants today. The Giants struck out 17 times today and swung and missed 27 times. Eduardo Rodriguez struck out 10 with nine of those coming on swinging strikes. The Giants wound up striking out 49 times in this series, the most of any series of any length this season, surpassing the 48 times they struck out against the Mets in San Francisco in a four-game series.

So, let’s talk about Bruce Bochy instead.

Earlier today, Ray Ratto published on SB Nation-hating Deadspin this piece about how baseball fans are the dumbest idiots to ever breathe.

You probably read at least a few of the acres of fevered prose that he actually won his 2,000th game Wednesday, but he’d done that months ago, June 15 at home against Milwaukee in a nondescript game during a nondescript part of the Giants’ nondescript season. There was no ceremony, no commemoration, no gifts, no nothing. A few quick handshakes, a couple of beers and then on to the next day’s work.

That’s because of the weird habit people have for counting regular-season games as the only thing that matters for the purposes of milestoning. In many cases, that might be true, but this isn’t one of those cases. In the matter of B. Douglas Bochy, the 44 wins he isn’t being credited for are the ones that will put him into the Hall of Fame.

The Red Sox honored Bochy before the game with a chair:

Between these two items, my takeaway is that we don’t fully “get” why Bruce Bochy is special. Ratto came at it from a tactical standpoint. The Red Sox simply recognized the on paper accomplishments of the guy and that’s it. There’s got to be more to it than that.

His players like him and that counts for something. Bill Walsh said a head coach had about 10 years of useful life before the players got sick of him and tuned him out. Players — with Aaron Rowand and Miguel Tejada being notable exceptions — haven’t tuned him out. That’s probably unquantifiable, and for the sports-industrial complex, it’s probably wholly unimportant. Managing players can be done by computers. Managing people can’t be — at least, not yet and not quite as effectively.

In a sport that eats up at least eight months of every calendar year in a situation where dozens of people are confined to the same location for hours on end, having a leader or “Voice of God” who engenders kindness and inspires a modicum of joy will always be an exception. How has Bruce Bochy not let his personal issues and preferences bog down his message to the team about appreciating the game and winning? That takes a form of character that’s difficult to mass produce or see in an interview. The Giants have been lucky in so many ways, and his emergence as a Hall of Fame manner because of his personality is one of those ways.

Bruce Bochy’s ability to treat his players with a basic, noticeable level of respect has been the cornerstone of his success. I can’t prove it, but I know it’s true. That makes me a bad baseball fan in the 21st century, but statistically speaking, I do not care.