The NBA Has New Tampering Rules, but Does it Really Want to Enforce Them? 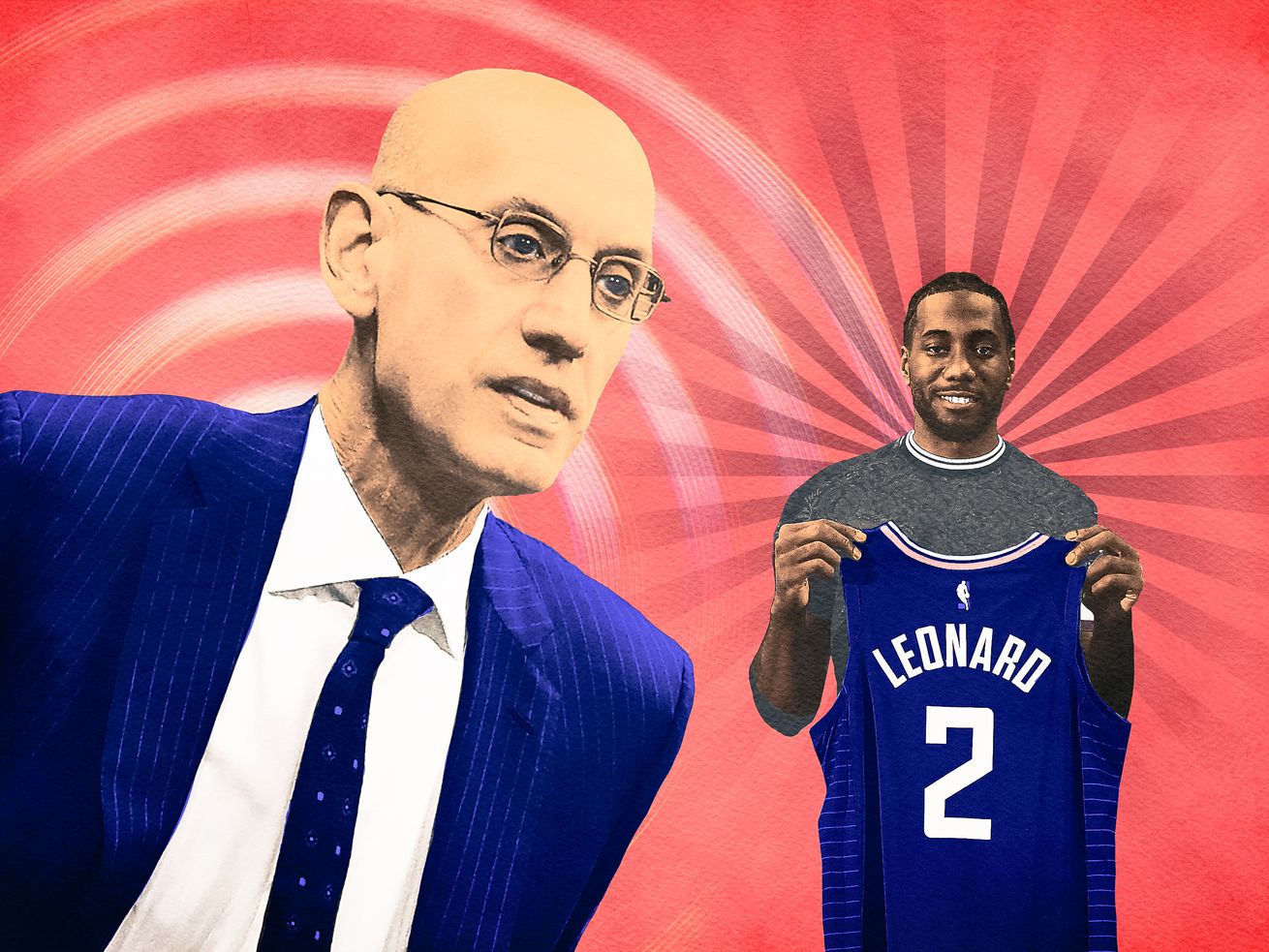 Adam Silver has put guardrails in to ensure NBA free agency takes place in July, not as early as the All-Star break. The question is, does the league have the stomach to enforce its own laws? And if it does, will it like what it finds?

If the opening of the NBA’s 2019 free agency season seemed ridiculous to you, that’s because it was. The number of stars who changed teams was eye-popping, even in an era of accelerated player movement. Far wilder, though, was seeing deals reported as signed, sealed, and delivered hours before the official kickoff of the period in which teams and players’ representatives are allowed to begin negotiating said agreements.

We’ve long known that such conversations often begin well before July 1. Back in 2017, then–Lakers GM Mitch Kupchak’s unwillingness to jump the gun—“He’s the only GM in the league who won’t engage at all before 9:01 p.m. [PT] on the first night of free agency”—was held up as proof that he wasn’t moving at the speed of the modern NBA. This adherence to “the rules” was even cited as evidence in support of Jeanie Buss’s decision to fire him and hand the reins of the organization over to Magic Johnson. (That worked out, um, weird.) ESPN’s Zach Lowe and Brian Windhorst wrote back in July that “team executives and agents report that free agency now unofficially begins at the draft combine in May,” nearly two months before free agency opens. That’s got nothing on chatter between players, though; last summer, Kyrie Irving told our own Bill Simmons that the offseason really gets going at “the All-Star break” in February, more than four months before free agency. (In what is surely an unrelated matter, Irving began grousing more and more over questions about his impending free agency around the All-Star break; after a sour ending to a disappointing Celtics season, he “ghosted” Boston in favor of a move to Brooklyn alongside buddy Kevin Durant.)

Agents, executives, and players discussing future plans before the starting gun has been one of the league’s worst-kept secrets for a while. Until now. Maybe. Two months after opening an investigation “centered on the timing of some of the earliest reported free-agency deals on June 30,” NBA Commissioner Adam Silver announced Friday that the league’s Board of Governors had unanimously voted to institute “a stricter package of measures to enforce compliance with tampering and salary cap circumvention.”

According to a league memo first obtained by Shams Charania of The Athletic, and reported on in greater detail by Lowe and Adrian Wojnarowski of ESPN, the proposal includes increased fines for teams found guilty of tampering with players on other teams before the start of free agency, or of reaching “unauthorized agreements,” such as deals that include the sort of perks and benefits that might be construed as attempts to circumvent the salary cap. The maximum fine for such a violation would jump from $5 million to $10 million. The new plan also reportedly aims at tighter enforcement of existing rules prohibiting player-to-player tampering.

And here’s where we get to the skepticism about whether those provisions will meaningfully change anything. For one thing, it’s unclear how much and how seriously the league can monitor communications between players—and how receptive the union that represents said players will be to stepped-up observation of its membership’s messages. For what it’s worth, National Basketball Players Association executive director Michelle Roberts recently lamented to Marc J. Spears of The Undefeated, “There’s just a perception that owners have rights and players don’t. I mean, it’s unfortunate that we tend to, on some levels, continue to view players as property as opposed to people.” So I’d expect some push-back on the whole “can I see your phone?” thing.

As for the front office side of things, $10 million is a relative drop in the bucket for deep-pocketed ownership groups when the potential payoff of early/impermissible contact is luring a rainmaker like Durant, Irving, Kawhi Leonard, Paul George, or Anthony Davis; the reward still far, far outweighs the risk. Silver and Co. seem to recognize that, though, which is why the new provisions also include ramped-up oversight on teams.

The new rules include annual, random audits of five teams’ communications with other teams’ front offices and with player agents, with a mandate that teams’ lead executives keep communications with agents for one year. Silver noted at a news conference on Friday that he does have the power to take team officials’ devices, and that while it’s not his preferred path to enforcement, he does view it as his job to “create an appropriate amount of tension in that area.”

Silver also made it clear that the league wields bigger hammers here—chiefly the potential to void contracts found to have been agreed to in illegal fashion, and the right to seize draft picks from teams found engaging in “conduct detrimental to the NBA,” pursuant to the powers granted him in the league’s constitution and bylaws.

”There needs to be consequences when rules are violated,” Silver told reporters, adding: “The ultimate goal is compliance.”

Such punishments are rare in recent NBA history, but not unprecedented. The league voided the seven-year, $98 million contract the Miami Heat offered Juwan Howard in the summer of 1996 after determining that it violated the salary cap. Four years later, after ruling that the Minnesota Timberwolves had reached a secret and premature agreement with Joe Smith in the summer of 1999, then–Commissioner David Stern voided Smith’s contract, slapped the Wolves with a $3.5 million fine, and seized the Wolves’ first-round draft picks from 2000 through 2005. (The team would later get its 2003 and 2005 picks reinstated.)

“What we are really seeking again is a cultural change in the league,” Silver told reporters. “There are rogue actors in any industry. We believe through these tools we’ve increased dramatically the likelihood that we’re going to catch you.”

Maybe that’s true. Maybe the mere threat of the stiffest punishments possible will make teams and agents pump the brakes a bit on their more flagrant rule-flouting, and hold their horses on leaking details to reporters until after the league officially opens the door to discussions. Conversely, maybe all the new rules will do is ensure that anybody with a stake in a prospective deal starts channeling all sensitive calls and communications through, um, disposable devices, and otherwise keep on keepin’ on.

Just because the league says it can strip draft picks doesn’t mean it will. And if the financial penalties are limited to fines rather than restrictions on available cap space, then maybe the prospective benefits of taking care of business ahead of time emboldens those negotiating to force the league to prove it will really swing those hammers. And if teams or agents get wind of their competitors getting up to their old tricks in new ways without further punishment, it won’t be long before everybody’s back to business as usual.

An awful lot depends on the still-getting-worked-out details of how the annual audits will work, and on what sort of danger teams might find themselves in if the league’s investigations uncover stuff that might not be tampering, but that execs and owners might still prefer not see the light of day. Whether the commissioner’s office really wants to change the way the league’s power brokers operate, or merely intends to save a little face and provide a semblance of plausible deniability on the dates and names for all parties involved, remains to be seen. It’s at least possible, though, that this pursuit will be the latest in a long list of instances of the NBA’s owners trying to put protections in place to save them from themselves and one another, only to open themselves up to a whole new host of unforeseen issues and unexpected consequences a year or two down the line. The league might get the reduction in overt, ridiculous tampering it seeks. But “be careful what you wish for” became a cliché for a reason.

NFL Week 3 odds and point spreads for every game